According to a recent Newsweek article, The Creativity crisis, the Creativity Quotient (CQ) among American children has been dropping steadily since 1990.   This drop in CQ correlates with the exclusive focus on the teaching of standards and the preponderance of television and video games.  The Global Achievement Gap, by Tony Wagner, describes needed 21st century skills which include characteristics of creative thinkers.  If creativity is lacking, and needed, educators (and parents)  should be seeking ways to enhance and encourage creative work and play.  Can creativity be encouraged while still teaching standards and basic skills?

According to findings from a  Michigan State University study child fantasy play correlates with creativity in adult life.  Nothing beats building a clubhouse in the backyard and playing out whatever ‘civilization’ may come to children’s minds, as long as basic supervision keeps them safe.  Perhaps another way of encouraging creativity is building a world in the digital realm.

Creating in any medium requires a thinking that is different from that which is required to simply consume what someone else has created. A blank plot of land in the virtual world can be daunting for anyone put in a position to create.

The typical initial response is to build a house or a building or something that is familiar.  Adding furnishings, avatar clothing and additional content to the environment are just the beginning.   The avatars may then ‘act’ in the new environment.   The elementary and middle school children on My Michigan on Reaction Grid have built an entire community based on Michigan’s geography and history.  problem-solving, critical thinking, and creativity were at play as well as research and the state curriculum standards in multiple content areas. 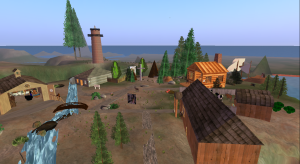 My Michigan – created by students